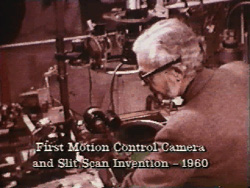 John Whitney Sr worked with motion graphics and made neat animations. Moving into the 1950’s, Whitney moved his work into the more commercial realms of Hollywood. After a short stint writing, producing and directing 16 mm films for television, Whitney worked as a producer of 1952 engineering projects for Douglas Aircraft, illustrating guided missile projects. His work as a director of animation at UPA studios in 1955 led him to a partnership with Saul Bass. The team produced such works as the opening title sequence for the Alfred Hitchcock film Vertigo, and television graphics for shows with Dinah Shore and Bob Hope (Youngblood, 1996). This period of work proved to be beneficial to the artistic desires of John Whitney to achieve a “digital harmony” between his musical composition and abstract graphic animation. In 1960 he was able to found the aptly named company “Motion Graphics Incorporated”.

Most of the work completed at Motion Graphics was created with a “mechanical analog computer for specialized animation with typography and concrete design” (Youngblood, 1970) that Whitney himself invented. After 10 years of commercial work, John Whitney would again have control over his own artistic experimentation (Youngblood, 1970). His work with the analog computer gave Whitney worldwide recognition, and one that did not fail to gain the attention of the International Business Machines company. In 1966, IBM awarded John Whitney its first “artist in residence” status to “explore the aesthetic potentials of computer graphics” (Youngblood, 1970). The film, or rather collection of analog effects entitled Catalog, was completed in 1961, a 7 minute, full color exploration of visual effects set to the music of Ornette Coleman. The film is characterized by its “overwhelming beauty” (Youngblood, 1970) and swirling templated shapes that critics even today feel is more successful than his later digital works.